My Collection of Autographs 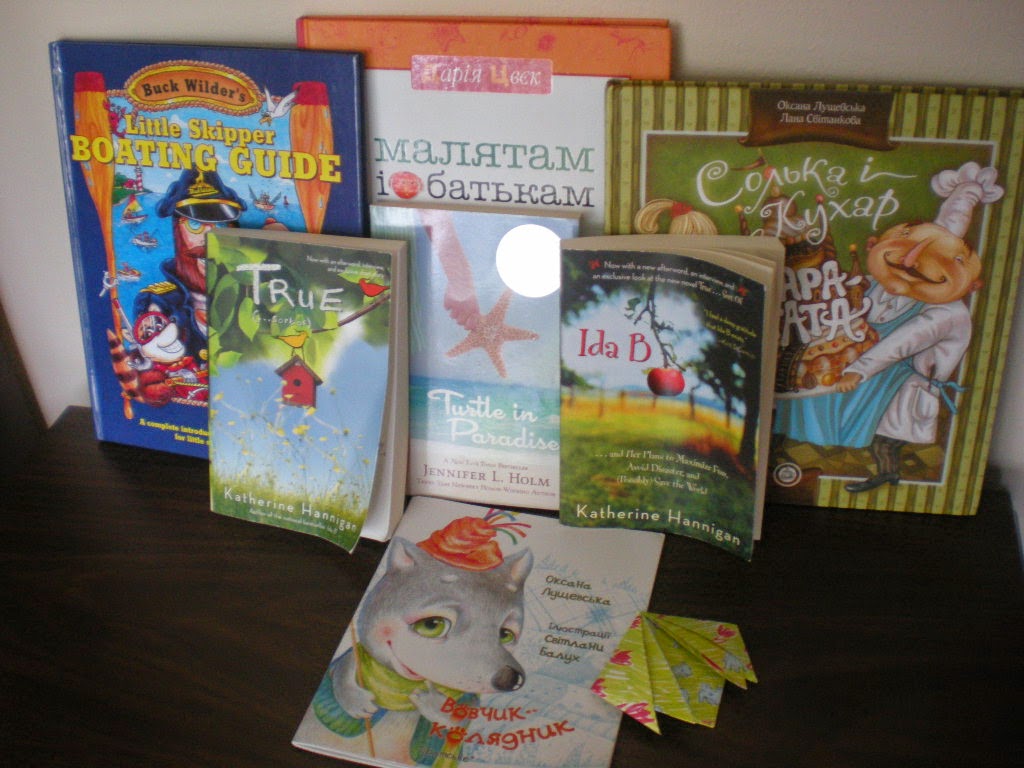 For Children and Parents
Daria Tsveck

This is the first book that I’m going to write about here. In all, there are 7. This cute lion was drawn by Marjana Savka at the presentation of this book in Ternopil, Ukraine. My aunt and uncle live there and they sent me this book. It’s about Ukrainian customs and traditions and it also has interesting recipes that have to do with holidays.

The Author, Katherine Hannigan came to our school. It wasn’t very hard for her because she lives right across the street from my school. She talked about her books, where she gets her ideas, and how we need to do our writing for school. Then she told us stories about her cats and a bird she found (look at Bird Story). Later she signed the books we had a chance to buy before. It was very fun listening to a famous author talk.

You’ve probably guessed that Buck Wilder is a pen name. His real name is Timothy Smith. He came to our school too, but he’s not from our area. He came last year and he, just like Katherine Hannigan, talked about his books, and his life. He also talked about how he makes his books (he’s not just the author, but also the artist.) In his books you have to find Fingers (a hand) and Fuzzy (a fuzzy worm/caterpillar). Buck Wilder writes books about nature, the outdoors and how we need to behave outdoors. The cool thing, Tim Green, is a character in his own books. (Not as Tim Green, but as Buck Wilder, of course.) The funny thing is that while in real life he’s completely bald, in his books Buck Wilder has a big beard and lots of hair. J

You don’t understand what the first part of the signature says? Well, that’s because it’s in Ukrainian. And what it means is “For Maria”. And no, Jennifer Holm does not know Ukrainian. My friend Oksana Lushchevska was at Holm’s presentation at the University of Georgia. She asked Jennifer L. Holm to write that. Why did Holm listen? My words that everyone has their own paradise were one of the topics of conversation there.
I already wrote about Turtle in Paradise before, twice. If you’re interested, please click on the links below:
Turtle in Paradise
The Presentation (In Ukrainian)

In this book, besides the story you can also find interesting recipes like “Curly Sunny Sandwiches”, “Salad-Crawler” and “Castle made of Cookies”. I already tried some of the recipes myself, and found them to be very tasty.
This book has two authors, but it’s only signed by one. Too bad, but I have a different book signed by Oksana Lushchevska.
Caroler Wolf
Oksana Lushchevka

I know that this book is not for my age by far, but the signature says “For Maria to read to Julia, and for Julia to enjoy.” Maria – that’s me and Julia is my little sister. This book is about a boy and a wolf, and it’s very cute. For kids 1-4 years of age.
True (Sort of)
Katherine Hannigan

This is the story that Katherine Hannigan told us:                One day there was a storm. After the rain stopped pouring, the lightning stopped striking and the thunder stopped booming, Katherine went outside. There she found a small bird that probably fell from its nest. Hannigan thought that it as a sparrow. She called the Iowa Wildlife Association and asked them if it was okay to raise a sparrow. They said yes. She had to feed him milk until he grew old enough to bird feed. Every 4-6 hours, even at night, she got up and fed the bird milk from an eyedropper.
She called the sparrow Bird. The bird started trusting Hannigan. Bird, said Katherine, and the bird flew closer. Sat on her arms, shoulders, head. Then it was time to go from milk, to birdseed. Bird didn’t want to eat the seeds. So Katherine got suspicious and checked the bird encyclopedia again and saw a bird that looked just like Bird. It was NOT a sparrow. It was a golden-bellied flycatcher, a bird that, unlike the sparrow, migrated to the south for the winter. Also, flycatchers eat spiders, bugs, flies, etc… Definitely not birdseed. Hannigan put a flycatcher outside and gave the bugs to Bird. After that she called the Wildlife Association again. They told her to bring the golden-bellied flycatcher to a branch of the Association. So she drove Bird to them. After that, she learned, he drove all the way around Iowa to the southern border. Bird was suppose to go migrate for the winter. (Don’t worry, he’ll be back.)
Katherine missed Bird, sop one time she went to the place where she first saw Bird. There she saw a birdy, very similar to Bird. “Bird, Katherine said, if that is you, then just let me know.” The bird flew closer. “Bird?” The bird sat on Katherine’s head.
So… That story shows that even the most impossible things are sometimes possible.
Опубліковано Mariya Yasinovska о 18:11